Hey, it’s me, Rudy the dog. Christmas is almost here and I want to talk to you about some unfortunate events that happened last year. The holiday was going really well and I received the presents you sent—thanks for those—but then things got out of control. I hope you’ll see my side of the story, because I really want to stay on that nice list.

I certainly hope this letter reaches you before you load your sleigh. The caring people at Palisades Veterinary Hospital said they could send it by email, but I thought a personal touch—which may include slobber, sorry—would best convey my story.

Those weren’t edible?—Decorations and pets

When my people brought a tree inside the night before Christmas, it smelled so good, but I didn’t lift my leg. They draped twinkling lights on the branches and then made garland from real popcorn and wrapped it around the tree—all while I watched politely from my bed. Lastly, they added silver balls—I mean, come on, balls!—that were so shiny I could see myself in them. You should know when it was time to go to bed, I was obedient and declared a “good boy.”

The next night, I was having fun with my new toy when I accidentally tossed it into the tree.      As I went to remove it, the popcorn garland got stuck in my mouth. I pulled and struggled—swallowing popcorn in the process—and the whole tree crashed on top of me.

Turns out, decorations are not supposed to be eaten—including by accident, which it was—and those balls didn’t bounce, they shattered everywhere! My owners were super angry and because I happened to have popcorn stuck on my lip they blamed me. From now on, I will stay far away from hazardous decorations, including:

A sugar cookie-scented candle singed off a few of my whiskers—so, no open flames either. I promise.

Escape to the North Pole—runaway pets

After my owners righted the tree and cleaned up the debris, the doorbell rang. I was so excited—I love company. Unfortunately, the door opened to reveal Uncle Ted. He’s loud and rough and laughs at my stubby tail. When he reached for me with his meaty hands, I shot out of the open door and slipped from his grasp in some kind of Christmas miracle.

Halfway down the road, I realized my collar was missing. I tried to turn around, but with thousands of flashing lights and an army of giant inflatable characters, my neighborhood was an unfamiliar place. My only hope was my microchip, which was implanted at Palisades Veterinary Hospital. I knew if I was found and taken to a shelter or veterinary clinic, they would scan the chip and  reunite me with my family. Fortunately, on this night, our neighbors spotted me and brought me home.

Trash to treasure—dangerous leftovers and pets

My owners kept me in a crate until dinner was over and Uncle Ted heckled his way home. My dramatic escape had made me hungry, but the food was all packed away by the time I was released from my confinement.

My growling stomach led me to the only place I knew to be open late at night, a place that offered all the same flavors as the beautiful banquet I’d missed—the trash can. I barely had to nudge the lid and glorious leftovers came raining down. I drank gravy from a paper bowl, gnawed on turkey bones, slurped up fat and gristle, and licked every wrapper—and maybe ate one or two. Why do humans discard the best parts of the meal?

In the morning, I was found on the kitchen floor surrounded by my own vomit and regret. At Palisades Veterinary Hospital I was diagnosed with pancreatitis—a painful and potentially fatal disease caused by rich and fatty foods. The bone fragments and cellophane wrapper I vomited were also concerning, as they could’ve caused internal injury or a dangerous intestinal blockage. After I was discharged, my owners posted a list of pet-toxic and harmful foods on the refrigerator, as well as the phone numbers for Palisades Veterinary Hospital and the ASPCA Pet Poison Control. The trash can was relocated permanently behind a closed door in case I should try to revisit that all-night diner on New Year’s Eve.

In conclusion, it’s not my fault—pets need protection 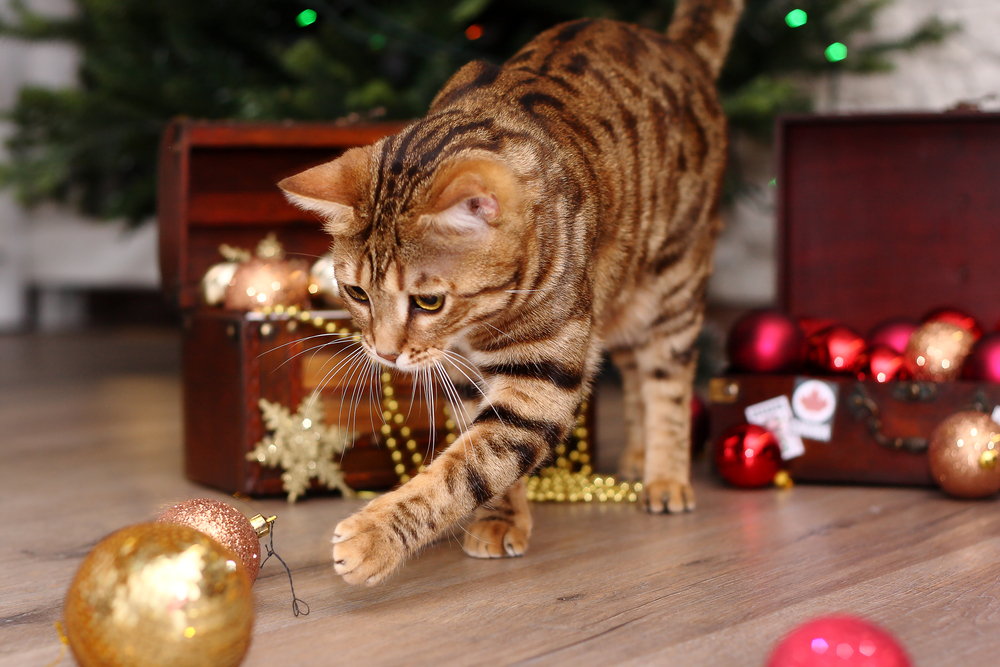 Santa, I hope you can see that I don’t deserve the naughty list. The holidays are a strange time to be a pet. We have to resist urine-marking an indoor tree, playing with toy-like decorations, and eating irresistible foods, and stay calm around scary family members.

My owners didn’t realize pets need a little extra supervision during these exciting times. If you could leave them a little note explaining such, that would be great—since you’ll be here to drop off my present anyway. Right, Santa?

If you need a reference—or your reindeer need help—contact Palisades Veterinary Hospital for expert wellness and emergency care.