Watch Out for Wildlife: How to Keep Your Pet Safe

Exploring the outdoors with your pet is a great way to engage in physical and mental activity, but wild critters can put a serious damper on your fun. When heading outside with your pet, watch out for the three most common wildlife threats in our area.

How to protect your pet from coyotes

Coyotes, whether in the wild or in urban areas, prefer to snack on their typical diet of rodents and fruit, rather than attacking your pet. However, accidents happen, and your furry pal could fall victim to a coyote attack. As civilization encroaches on coyote habitat, these wild canines can be pushed to out-of-the-ordinary food sources. To make your home less hospitable to coyotes, and to protect your pet from attack, follow these tips:

If you and your pet encounter a coyote, stand tall, make eye contact, and make loud noises to scare off the animal. However, if a coyote bites your pet, head immediately to Palisades Veterinary Hospital, or the nearest emergency hospital if it is after-hours, for wound treatment. Your pet may also require a rabies vaccination booster, although rabies is rare in coyotes.

How to protect your pet from bufo toads

Although the genus Bufo includes more than 200 species of toads, Bufo alvarius is the only species that exists exclusively in the Sonoran Desert. Unlike most toads, B. alvarius is semi-aquatic and must remain in the vicinity of dependable water to survive. Consequently, the species’ principal habitat is the drainage areas of permanent rivers and streams of the Sonoran Desert.

This bufo toad species can grow up to seven inches in length, and is identified by its squat body, broad head, dark brown or grayish green skin, and large glands on the neck and limbs, and in the corners of the mouth. These glands contain a milky white venom that can be highly toxic to pets and cause hallucinations in people.

Bufo toads are most active from late May to September, mainly through the summer rainy season. They are nocturnal and attracted to lights at night, since much of their prey is also drawn in by bright light. Mating typically takes place around permanent ponds and temporary rainpools, so avoid those areas when hiking with your pet.

If your pet stumbles across a bufo toad and licks, bites, or otherwise touches the toad, they can ingest the venom and display toxicity signs, which include:

Immediately dilute the toxin if your pet comes across a bufo toad. If possible, wear gloves to protect yourself from the venom, and flush your pet’s mouth out with a running garden house. Position the hose so the water flows from back to front, and out of your pet’s mouth, rather than down their throat.

After flushing the toxin at home, contact Palisades Veterinary Hospital to determine whether we are open, or if you should head straight to the nearest emergency hospital. Your pet will likely require hospitalization, fluid therapy, and toxin treatment after bufo toad exposure. They may also need medication to manage seizures and cardiac issues, or supplemental oxygen if they’re having difficulty breathing. The best way to keep your furry pal safe from bufo toad toxicity is to avoid their habitat.

How to protect your pet from snakes

While most snakes are non-venomous, their bites can still pack a punch. The most common venomous snake in Fountain Hills is the rattlesnake. As daytime temperatures consistently reach 80 degrees, you’ll see many more snakes out and about as they seek the sun’s warmth. When hiking with your pet, if you see a snake, or hear a rattle, retreat. Snakes are equally scared of people, and would much rather warn you off than attack, so avoid throwing rocks or poking at them with sticks. Instead, walk back in the direction you came, or walk around the snake, giving a wide berth. Ensure you keep your pet on a short leash and close to your side so they cannot dart at the snake and trigger a strike. Also when out exploring, ensure your furry pal does not stick their nose under rocks, in bushes, or other cool places snakes may hide.

If a rattlesnake bites your pet, remain calm. Do not try to suck out the venom, and avoid getting your pet agitated, as this will only increase the speed of the venom being pushed through the body. Transport your pet carefully back to your vehicle and immediately call Palisades Veterinary Hospital to determine whether we can provide emergency treatment, or you should drive to an emergency hospital. Rattlesnake bite treatment generally consists of antivenin administration, fluid therapy, pain management, and other applicable nursing care. A rattlesnake vaccine also is available.

How to protect your pet from scorpions 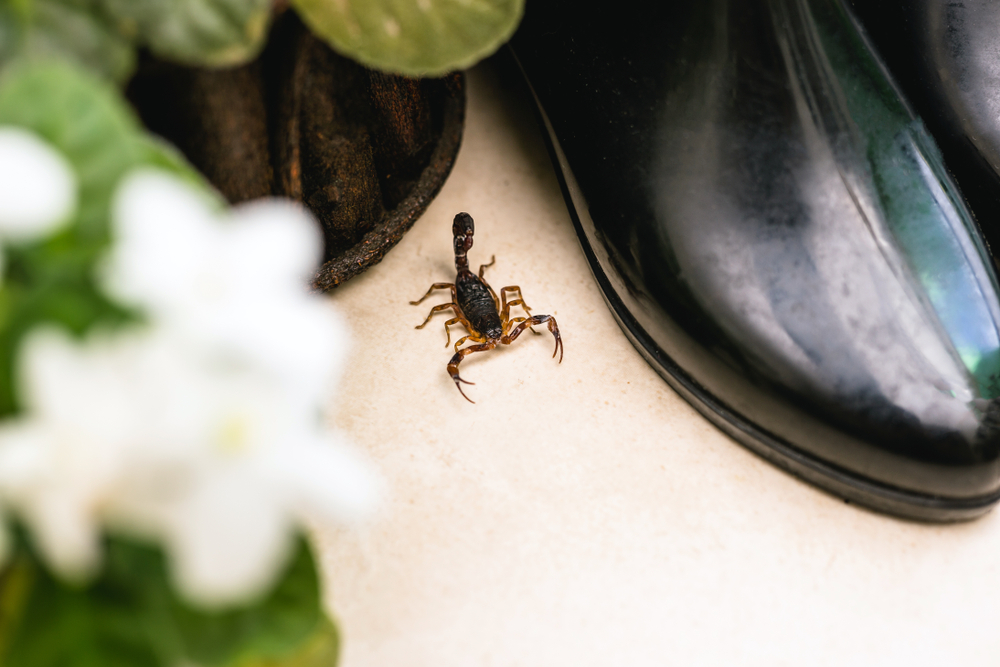 Although more than 30 scorpion species live in Arizona, only the Arizona bark scorpion, found in the Sonora Desert, is potentially deadly to people and pets. However, all scorpions release venom when they sting that can cause tissue damage and significant pain. Scorpions are most active when the daily temperature reaches 88 degrees, and you may see them sunning themselves during a desert hike with your pet.

Venom from a scorpion sting can cause signs that include:

If your pet is stung by a scorpion, call our hospital, or rush them to the nearest emergency hospital. If the offending scorpion happens to be an Arizona bark scorpion, time is of the essence as your pet’s condition can deteriorate rapidly.

Scorpions would rather run and hide than stand and fight, but they will sting if they feel threatened. They prefer dark, damp places, so prevent your dog from sticking their nose in holes and under rocks while hiking.

Help protect your pet from wildlife by ensuring their vaccinations and parasite preventives are up-to-date. Many wild animals carry diseases and parasites that can be transmitted to your furry pal, so staying current on preventive care is essential for their protection. Give our Palisades Veterinary Hospital team a call to schedule an appointment.